Learning, laughter, and love make me happy. I think we learn from everyone, especially the people who frustrate us. I embrace moments of gratitude and look for beauty in most things. I am exploring this venue as a space to process ideas and concepts that encourage positive well-being. LUCK represents love, understanding, compassion, and kindness to me. My goal is to live my life with intentional purpose surrounding those four things.

It is impossible to create immunity from the harmful, painful, and at times devastating statements and opinions at times, but I think there is a better way to insulate ourselves and promote hope than by making sweeping statements of separation or reacting with anger and fear.  Be honest, when was the last time that you effectively persuaded someone to change their values or character by simply ‘telling them something”?

We do not need lessons to teach people, we need to be models of what we hope for.  You don’t have to quit your job and become a full time activist, just be truly active in your life.  If you are reading FB posts that hurt your heart, commit to posting something that lifts you up.  If you see a negative news story that causes you to feel fear or uncertainty; acknowledge your fear and make a decision to move past that fear.  If you find yourself feeling anxious and uncertain, empower yourself with knowledge and seek out your own answers.  It’s not about avoiding pain it or pretending fear doesn’t exist, it’s about finding ways to appease it.

Make a commitment to express gratitude every single day, tell someone you love them, offer help to someone in need, be thoughtful about your communication with others, be open to the possibility of hope, and make a conscious decision to express compassion in every single interaction you have.  If you think of the most powerful ‘lesson’ you ever learned, think about how that came to be….chances are that it was through your own action and decisions.  If I had to ‘tell’ someone just one thing, I would simply share the wise words from Gandhi’s- “Be the change you wish to see in this world.”

I am amazed how much energy I have committed to negative people and their experiences.  I used to think that I toxic people were drawn to me for some reason. I would find myself completely worn out and thinking “Why is everyone around me so unhappy?”  And after a while, my frustration would get to the point of pure exhaustion. And I would wonder how I could stay positive with so much negativity around me and even worse, I would think things like, “Maybe I just need to be more negative too.”

Finally one day, I heard someone make the simplest of statements.  They were talking about how to navigate unhappy co-workers and all the drama that can suck the life out of your work day.  The statement was something like this, “You have to become disinterested in the negativity. Begin to consciously decide that you have no interest in it and it will cease to impact you.”

My initial reaction was to sit down.  Those words were so simple, yet profound.  It made so much sense.  The reality was that I had to acknowledge my own interest in the negativity, the drama, the tragedy of it all.  I mean, we have have an entire culture that thrives on reality television and pop culture that perpetuates heartache, grievances, and chaos.  And I DID find that interesting.  I like to think it appealed to my character that believes someone can persevere through hardships but the reality was that by paying attention to the gossip or negative stuff, I didn’t have to pay attention to myself and acknowledge painful feelings or experiences of fear or insecurity.

So I began to digest this idea of disinterest.  I sat with it for a day or so and then I became excited. I wanted to try this out the next day.  I began my day as I usually do and sure enough, within an hour I had my first opportunity to practice disinterest.  Someone was complaining about another coworker and their ‘tone’ and remarking on a recent interaction that was, according to this person, totally unbelievable.  I recognized how easy it would be to comment and not only become interested but engaged in the conversation.  But instead, I smiled and simply choose to think about a positive quality about the very same person who was being talked about and quietly walked out of the room.

The opportunities kept coming.  It happened when someone cut me off in traffic, when my bank made an error on a deposit slip, when someone criticized me for a mistake, and when I spilled coffee down my shirt.  It’s not about ignoring these things or pretending they don’t happen.  Its about recognizing what I can learn and figuring out how I want to move forward.

As I become more in tune with opportunities that present for my disinterest, this amazing thing happens…I simultaneously become more open to the possibility of hopefulness and gratitude.  My environment has not changed, the landscape is the same, yet my capacity for love, tolerance, and understanding has only increased.

It is not like I am suddenly immune to negativity but now I am better at allowing myself to truly assess my own feelings of stress, insecurity, or fear.  Accepting the reality of the situation enables a healthier and happier way to appease my heart than getting consumed by the chaos.  Some times are easier than others, but I am committed to the practice of becoming less interested in the negativity and much more interested in love, understanding, compassion, and kindness.

In the spirit of happiness and a life of authenticity, the practice of acceptance is paramount.  Navigating self-acceptance is one of the more challenging aspects of my own well-being and I suspect for others as well.  The conflict arises when we are unable to accept where we are with emotional and spiritual development while simultaneously accepting there is potential to continue to grow and be better.

Acceptance is about acknowledging that we are complex beings full of emotions, experiences, and feelings that create our sense of self.  It is about understanding those instances of insecurity, uncertainty, fear, and separation in addition to experiences of joy, love, and hopefulness.  It’s about accepting the reality of all those things without judgement or blame.  Often we think that when we react a certain way or have a certain response, we must launch into the “why?”

The moment we start adding qualifying statements about who we are or what causes us to respond a certain way…we are trying to explain, rationalize, and perhaps even justify ourselves.  When we add these types of disclaimers to our interactions and experiences, we unknowingly add a stamp of rejection to our being which creates the conflict.  We create internal chatter that who we are, what we are experiencing, and our feelings/emotions are not okay.

Accepting the reality of any given circumstance, situation, or interaction initiates a true perspective and shifts the entire experience.  It is no longer about judging, blaming, or punishing.  It is about gaining understanding and empowering ourselves with knowledge and deciding how we are either going to stay in that moment or act on a potential.

As the practice of acceptance becomes more fluid, other practices will harmonize in a beautiful symphony of love, understanding, compassion and kindness.  And when we experience these things deep within our being, the abundance will flow through our lives and help saturate all of our surroundings. 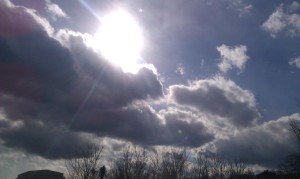 Afternoon by the river